Author: Vann Bunna, a Co-founder of The Thinker Cambodia and a Research Fellow at Cambodian Institute for Cooperation and Peace (CICP). All views expressed are his own.

Editor: Heng Kimkong, a Visiting Senior Research Fellow at Cambodia Development Center and a PhD Candidate in Education at The University of Queensland, Australia. 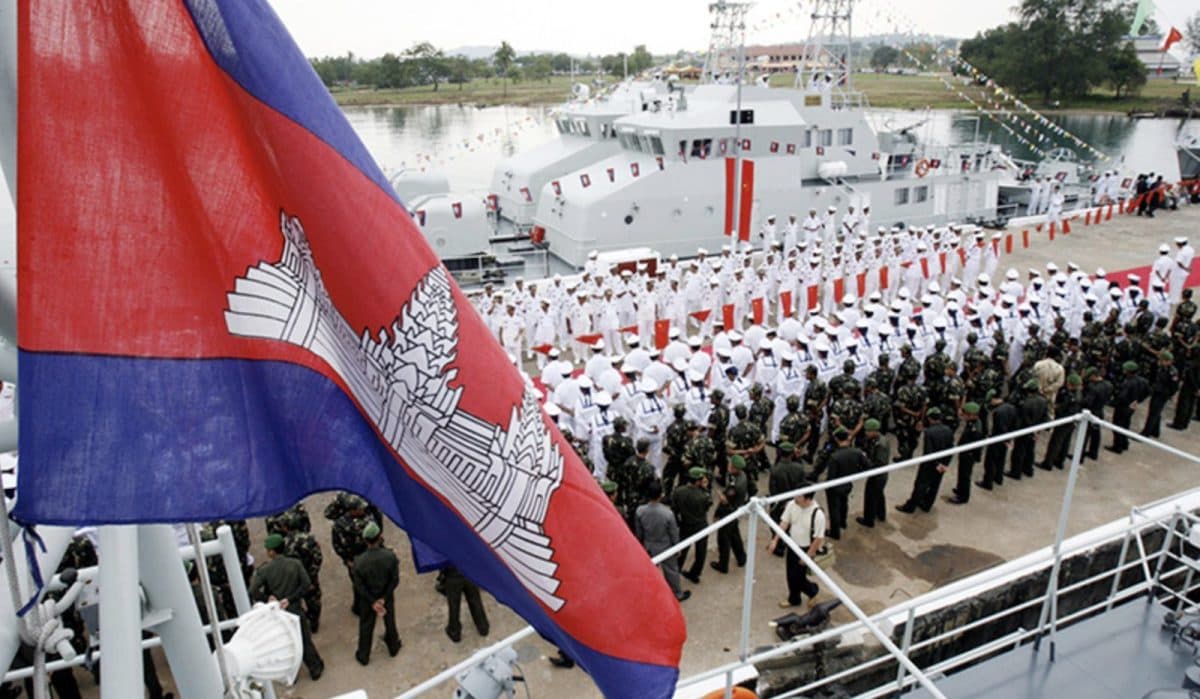 Cambodia has been increasingly seen as a centre point of the US-China competition for influence in Southeast Asia. The recent allegation of China’s potential military presence in Cambodia is a critical point to test the Kingdom’s resilience and capability in navigating contemporary international politics of great power rivalry. Amid the US-China geopolitical competition, the issue of the Ream Naval base seems to be a matter of great concern that can trap Cambodia in the middle of great powers’ geopolitical and geostrategic struggle, potentially turning it into a battlefield.

Cambodia’s tragedy in its modern history occurred when Cambodia abandoned its neutral foreign policy during the Cold War. It is worth remembering that after gaining independence from France in 1953, King Norodom Sihanouk had adopted a determinedly neutral foreign policy, aligning neither with the US-led liberal bloc nor the Soviet-led communist bloc. To King Sihanouk, the neutral policy was the best diplomatic stance for Cambodia to prevent itself from being caught in the Cold War.

Unfortunately, Cambodia was no longer able to maintain its position of neutrality. It gradually engaged with the Communist bloc as evidenced by the visits of King Sihanouk to Moscow and Beijing. In May 1965, King Sihanouk cut off diplomatic relations with the United States. In so doing, he abandoned Cambodia’s neutral international course to establish alignment with communist China. Remarkably, that became a turning point in Cambodia’s history – the country flung into a proxy war and protracted civil war for a few decades. Some scholars argued that King Sihanouk’s decision to break Cambodia-US relations to align with China gave the latter leverage to pressure Phnom Penh to allow Viet Cong to build routes along the Vietnam-Cambodia border. The result of this unbalanced foreign policy was the bombing by the US which killed around 500,000 civilians.

Consequently, as King Sihanouk was heavily aligned with China, the US supported General Lon Nol and Prince Sarik Matak to stage  a coup to oust Sihanouk from power in March 1970. After seizing power, Lon Nol and his associates established a pro-liberal bloc Khmer Republic in October 1970. The Khmer Republic pursued a bandwagoning foreign strategy towards the US amid the Cold War. The US later used part of Cambodia’s territory as a battleground to contain Communist influence in Southeast Asia, especially to fight against Vietnamese communist Viet Cong in the Indochina war. Between 1965 and 1973, the US dropped 2.7 million tons of explosives on Cambodia - more than the bombs that the Allies dropped during World War II.

Tragically, hundreds of thousands of civilians lost their lives. Their houses and properties were damaged. More unfortunately, the US-backed Khmer Republic collapsed when the US lost the Vietnam war and withdrew its troops from Southeast Asia in 1975. The US -  at the end of the day - abandoned Cambodia and handed it over to the butcher –  the Khmer Rouge. Prince Sirik Matak was very disappointed with how the US treated Cambodia. In a letter to the US Ambassador John Gunther Dean, he wrote:

As for you and in particular for your great country, I never believed for a moment that you would have this sentiment of abandoning a people which chosen liberty. You have refused us your protection and we can do nothing about it. You leave us and it is my wish that you and your country will find happiness under the sky. But mark it well that, if I shall die here on the spot and in my country that I love, it is too bad because we are all born and must die one day. I have only committed this mistake of believing in you, the Americans.

After the US left Cambodia, Khmer Rouge took control over the country on April 17, 1975. Democratic Kampuchea led by Pol Pot was officially established. This genocidal regime supported communist ideology and was aligned with the Communist bloc during the Cold War. The Democratic Kampuchea gradually isolated itself and pursued the isolationist foreign policy towards the outside world – having relations only with a few foreign countries, one of which was China, its strategic partner and major ally.  At the time, China’s aid to the Khmer Rouge was around 90% of the regime’s foreign aid. Interestingly, Andrew Matha – author of Brothers in Arms: China’s Aid to the Khmer Rouge, 1975-1979, noted that “Without China’s assistance, the Khmer Rouge regime would not have lasted a week.”

More remarkably, because of China’s aid, the Khmer Rouge could extend its purge campaign to eliminate people they considered as internal enemies of the regime. The purge campaign targeted the intellectual, monks, urban bourgeois and officials from the previous regime. Within a few years, the Khmer Rouge regime pushed Cambodia to the brink of extinction, killing around 1.7 million Cambodian people. After the Khmer Rouge collapsed in 1979, a successor regime, called the People’s Republic of Kampuchea, was established. This new regime was always distrustful of China’s intentions as China was a key ally of the Khmer Rouge. As Cambodian Prime Minister Hun Sen used to say, “China was the root of all that was evil in Cambodia”.

Will tragedy return to Cambodia?

Our history has taught us that tragedy occurred when our country heavily relied on or depended on a single great power. A small and weak state like Cambodia should never over depend on one great power, at the expense of its relations with the other major power. Any unbalanced alignment with great powers warrants vulnerabilities and risks. Cambodia can and should learn from its past lessons to avoid repeating its strategic mistakes.

Amid the great power rivalry, Cambodia is seen as China’s closest ally in Southeast Asia. China is now Cambodia’ increasingly significant trading partner, largest aid donor, major foreign investor, and key supporter of the current regime. Since 2010 when both countries established their Comprehensive Strategic Partnership, Cambodia has increasingly become dependent on China economically, politically, and strategically.  Cambodian government spokesman Phay Siphan has enthusiastically praised China, saying that “Without Chinese aid, we go nowhere.” Recently, at Nikkei’s Future of Asia Conference, Prime Minister Hun Sen bluntly emphasised Cambodia’s reliance on China, saying that “If I don’t rely on China, who will I rely on?” This statement is worrying as it indicates a clear trend that Cambodia is falling into China’s orbit.

While Cambodia enjoys its honeymoon relations with China, its bilateral ties with the US face challenges. In addition to the deterioration of Cambodia’s democracy and human rights record, rumours and allegation of potential Chinese military presence at Cambodia’s Ream Naval base has further weakened Cambodia-US relations. At a recent meeting with Prime Minister Hun Sen in Phnom Penh, for example, US Deputy Secretary of State Wendy Sherman expressed serious concerns about the Chinese military presence in the Kingdom and urged Cambodia to maintain an “independent and balanced foreign policy”. This statement indicates the US’s views of Cambodia, seeing it as China’s close ally. The US is clearly not pleased with Cambodia’s increasingly tight alignment with China.

In the midst of the increasing geopolitical competition between the US and China, Phnom Penh’s heavy reliance on Beijing does not bode well for Cambodia’s future. The Kingdom seems to play a risky game that might lead it to tragedy again if its strategic calculation fails.  The recent allegation of the Chinese military presence on its soil serves as a sign indicating that Cambodia could gradually become a battleground of great power rivalry as seen in the 1960s and 1970s. Despite this, some may argue that this line of thinking is only a Cold War mentality that does not reflect the current world situation. Of course, King Sihanouk, Lon Nol or Pol Pot might have thought the same, arguing that their alignments with a single great power were right in their circumstances; unfortunately, they had brought unforgettable tragedy to the country in the end. More importantly, either in Cold War or at any time, great powers always fight for their supremacy. As a renowned neorealist scholar John Mearsheimer convincingly argues, “great powers always compete with each other” to be the number one in the system. The concept of Thucydides trap also reminds us that a rising power always threatens to displace an established power, which will result in a major war.

Thus, to minimize the possibility of any tragedy happening again, Cambodian leaders and policymakers should be mindful of Cambodia’s tragic past and must try to avoid repeating the same strategic mistakes that made the country become a victim of great power rivalry. Cambodia, as a small state with limited resources and leverage power, should embrace multilateralism and regionalism as a policy option. It should try its best to pursue a “balancing” and “hedging” foreign strategic approach rather than adopt a “bandwagoning” foreign policy towards great powers. The Kingdom must also adhere to the principle of “permanent neutrality and non-alignment” enshrined in Article 53 of its Constitution. It is crucial that Cambodia should carefully calibrate its foreign policy to avoid falling victim to great power competition and to achieve its development vision to become an upper-middle income country by 2030 and a high-income country by 2050.