The Promised Land of Democracy: Cambodia’s Need to Realise Free and Fair Elections 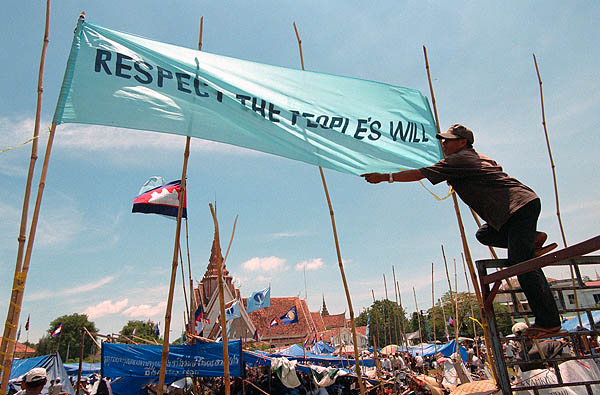 On March 1, 2020, Prime Minister Hun Sen announced that Cambodia will hold commune elections on June 5, 2022, and that the general election shall be held in July 2023, under the theme of  “free and fair” - and in monsoon season humidity. In theory, it might be a “free and fair” election for multi-party democracy, with nearly 50 parties competing with the long-ruling party CPP in the commune election. But in reality, it might be a bridge too far, with competitors unlikely to even touch the CPP’s tail. However, we can never be too sure of what will happen in Cambodia’s next election in 2023. Do citizens care to invest in democracy and vote, after the pandemic shot out their daily bread and the staunchly right-wing party was kicked to the ground, setting like a sunset in 2017?

With this op-ed, I am not going to provide readers with foresight or prediction on the Cambodian election in 2023, as I know well that Cambodian youth and political observers already understand what is going to happen in the next election. Who is going to win all the seats? And, who is going to rule the country? Prime Minister Hun Sen already claimed at the Peace Palace on August 1, 2021, that he would stay in power until he “no longer wants to do it anymore.” Instead, with this op-ed, I am simply going to walk readers through my explanation of why free and fair elections could be the solution to improve Cambodia's democracy in the future.

Signs of Decay After the Crackdown

After the crackdown on the outlawed CNRP from the political boxing ring in 2017, the CPP won all the power, with nearly 90% of the ballots, and then eliminated almost all that remained of the CNRP - members, supporters, and activists - with threats, intimidation, and prison terms.

The alleged conspiracy, incitement to commit a felony, and social unrest become the most powerful tools to freeze those former CNRP activists and members, linking them to the so-called “Color Revolution” to overthrow the Cambodian government.

From this brief alert, we can see that the future of democracy in Cambodia has been debilitated, making its shadow fragile and uncertain. The issue was deepened by the crackdown of independent media organizations, inducing the Cambodia Daily to be hit with a multi-million-dollar tax and forced to shut down.

According to Lee Morgenbesser, an Australian political analyst who has written multiple journal articles about Cambodia’s political situation, Cambodia is heading towards “Hegemonic Authoritarianism”. Elliot Brennan of the Lowy Institute warned that “If Cambodia democracy is allowed to fall without a whimper from the West, the contagion of despotism will be hard to contain in Southeast Asia.” On the other side, NEC spokesman Dim Sovannarom told the  Khmer Times on August 3, 2021, that “We are working based on the law and we are balanced, not like others say.”

Thus, to the question of whether Cambodia's election is going to be free and fair, the answer lay in the eyes of Cambodian youths and political observers. As a political analyst, Em Sovannara told VOD News: “their participation in the 2022 and 2023 elections is just to beautify the garden of democracy.”

However, without true intention from the government to improve the landscape and image of Cambodia’s democracy by allowing those minor parties to realistically challenge the rule of the 70-year-old Cambodian People’s Party (CPP), which retains control of the armed forces, the competition will be little more than just a game, like riding a horse without holding the reins.

Why does Free and Fair Matter?

In the game of elections, both actors should play the cards of “free and fair,” demonstrating to the audience that they can be satisfied with ideas of the “win-lose” theory. However, in the Cambodian game of elections, where the minor players are just newly registered entrants to the political system with no power in hand, they will have no sword to fight with CPP. Cambodian People’s Party spokesman Sok Eysan himself told local news that the CPP welcomes the participation of all political parties in the upcoming elections, but that the minor parties “could not be compared to the CPP.”

Cambodia’s government always claims to uphold democracy and, thus, free and fair is essential to that democracy. Moreover, to ensure that individual electoral rights can be exercised effectively, and to ensure the commissions are not dominated by pro-government representatives, freedom and fairness must be promoted and implemented.

Thus, to ensure and promote a free and fair election for Cambodia’s future democracy for the next generations, there are three steps that must be taken.

First, the Cambodian government should staff the National Election Commission (NEC) independently in order to avoid rumors of internal bias. After the NEC was nominated by the ruling party CPP, many criticisms were aired: that it’s not neutral or independent and remains under the influence of the ruling party. Simply put, to uphold the integrity of the NEC as the mandated actor to organize, oversee, and monitor all aspects of the elections from registration of voters and parties to ultimately verifying the accuracy of the final results, the election body must not be undermined by a real or perceived bias towards the CPP government.

Second, the Cambodian Government must respect the basic principles of human rights and fix its own problems by not weaponizing the criminal code to target the opposite party’s supporters and other human rights activists. The government should give amnesty and allow them to engage with the freedom to establish political associations and participate with any party they choose. To continue to target and threaten them will only act as a threat to the next youth generation and a deterrent to participating in the political landscape. Since the Cambodian government always speaks of upholding democratic principles and respecting human rights, free and fair elections must be demonstrated to the public.

Third, small parties should merge together into one or two parties, as the Human Rights Party (HRP) and SRP (Sam Rainsy Party) did to confront the CPP in 2018 after both parties had endured fewer votes from supporters in 2013. Being a new and small party attempting to compete with the long-ruling CPP, does not arouse much interest in voters. Without a strong string, a kite will easily be cut free. Simply put, people aren't interested in supporting small parties, but they might choose one big party that can oppose the strong one.

The COVID-19 pandemic has revealed some major shortcomings in both Cambodia’s political and health care systems. The resulting economic insecurity and inequality - in which the rich get richer, the poor get poorer - makes it hard to maneuver free and fair elections in Cambodia. Moreover, since there is no party that could even touch the tail of the CCP and no neutral national institutions to organize and oversee the elections, the 2023 general election would just be little more than a show, leaving the political landscape in a state of limbo and turmoil. However, if the government and existing minor parties genuinely seek to improve the situation, then anything is possible. Together, they can compete in solidarity and stop criticizing each other, carrying out their jobs to benefit the Cambodian people, as is their responsibility, rather than serving their own interests. Cambodia's democracy may be at a crucial turning point - free and fair elections are possible and the next generation would be proud to follow their legacy.