Opinion: Paris Peace Accord Should Move Past Controversy After 30 Years

Written by: Han Noy, a 2rd-year student majoring in International Relations at Paññāsāstra University of Cambodia. 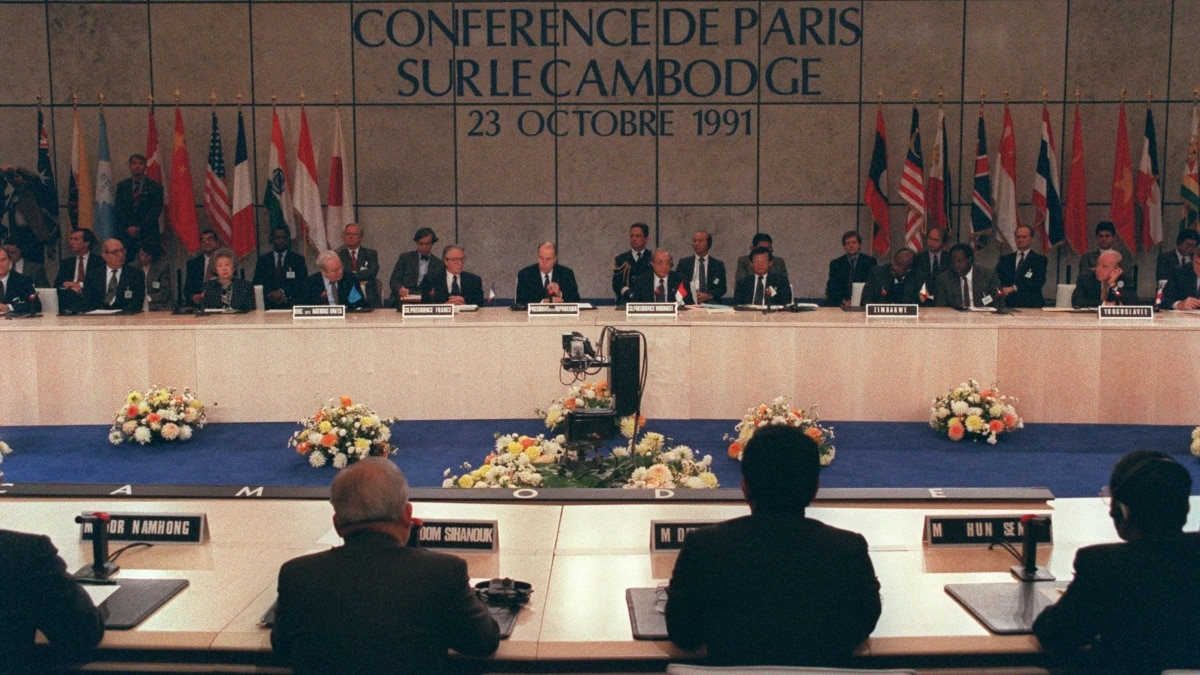 October 2021 marks 30 years since the signing of the Paris Peace Agreement, the first multilateral peace deal accomplished following the end of the Cold War. The agreement aimed at ending the decade-long civil war in Cambodia, paving the way for the United Nations to administer the country temporarily through a peacekeeping mission to disarm the conflicting parties and ensure the repatriation of the refugees. In addition, it also provided a legal foundation for the country to organize a free and fair election while enabling it to move toward multi-party democracy, in which those in power are held accountable for upholding and defending human rights.

Thanks to the 1991 Paris Agreement, Cambodia remains at peace with stability and harmony, and with these, it can achieve rapid development. However, even on its 30th birthday, the view toward the agreement has continued to be controversial among politicians and civil society groups. The government side has always claimed that the agreements were irrelevant as the major points of it had been incorporated into the constitution. As seen, the government even removed Paris Peace Agreement Day from the list of the public holidays.

On the other hand, the opposition parties and civil society groups generally argue that it has been still binding upon all signatories including the Kingdom itself as it has not informed all stakeholders of its official decision to annul the agreement.

As a young Cambodian, who was born years after the creation of this agreement, I am disappointed to witness that contemporary Cambodia continues to suffer from endless disagreement and misunderstanding of the 1991 agreement, which, of course, lead to more tensions, discrepancies, and even conflicts among people with different political tendencies.

I think what people should understand here is that the contested historical narrative does not serve the purpose of national development, prosperity, and peace. Instead, by not walking away from this obsolete narrative and myth, what we will achieve is only creating a more polarized and divisive society because we choose conflict over solidarity, tensions over co-existence, and isolation over cooperation.

It demonstrates that whether to claim this agreement is dead or not, will lead to nowhere. Therefore, our political leaders and other stakeholders should learn to move beyond this never-ending disagreement. To me, we all must accept the fact that the agreement provided our country with political settlement to end over two decades of armed conflicts. It, more importantly, allowed us to bring forward national reconciliation as well as pursue liberal democracy and human rights. Without this historic event, our country would not have been in harmony as it is right now.

In addition, I also want to accentuate that the Paris Peace Agreement Day should once again be commemorated and remembered. It also should be regarded as the day that Cambodia got out of the political quagmire, and intimately found the way to perpetual peace. By saying this, I believe it is more than possible that each of us can live up to the spirit of both the 1991 Paris Agreement and the 1993 Constitution as they are the founding documents of modern Cambodia. But speaking of the acknowledgment, what I think remains a challenge is whether all political elites, especially those in the ruling party are willing to respect and put into practice the principles stipulated in the Paris Agreement and the Constitution or not.

Moreover, the spirit of honoring the extraordinary day should be cherished, not undermined. It means all Cambodians should be free to commemorate the day without any disturbance or prevention and any efforts to politicize this event should be ended.

More importantly, this historic day should be the day on which our political elites reflect on whether they have already done enough to comply with these documents fully. If they have not, they have both legal and moral obligations to push themself harder to adjust and correct their course of actions. It can manifest their genuine conscience and intention to place national interests at the heart of their positions while trying to avoid the pursuit of their vengeance and political ambition.

In the meantime, I still see the importance of them reinventing their traditional political culture as the current one is already old-fashioned and doesn’t serve the benefits of the people. As we all could see, "instead of working for a better future for Cambodians, politicians of both sides spend their time insulting, mocking, insinuating, accusing, framing, and labeling one another almost for the sake of provocation alone.” Unfortunately, this sort of political culture does not either safeguard or drive development and prosperity, but only leads to destruction, polarization, and reduction.

If we continue to be split by different political narratives of the same event, our dream of transforming and achieving inclusive and sustainable growth will just be at stake.

For our compatriots, we all also have a responsibility to uphold the principle of unity and keep in mind that “unity is strength while division is weakness.” History has already revealed that the divisions among us only resulted in power decline and territorial losses.

As we could see these appalling consequences, why can't we just find a way to work together to make our country strong again? Our politicians can do a lot more by dedicating their time and effort to finding solutions to address pressing social challenges, such as rampant corruption, land grabbing, human rights violations as well as environmental degradation, and illegal immigration?

All in all, the spirit of the Paris Agreement should be revived and commemorated, and the documents are still relevant and significant for modern Cambodia. The multiple elucidations perceived by politicians regarding the Paris Peace Accord Day should not continue to be the source of hostilities, political confrontation, and tension within Cambodian society. It rather should be the day that we have “another chance to live, unite, and work together to achieve the Cambodian dream.”

Also, the debate on whether the agreement is invalid or not brings us nowhere. Thus, all stakeholders need to rethink and seek common ground to address socio-economic issues facing contemporary Cambodia. We should not let the past haunt our future; we need to take our past lessons thoughtfully and seek constructive and innovative means to map out and plan for the future. The fate of our country indeed lies in the hands of all Cambodian citizens; it is, therefore, high time for us to be committed to building true national unity, supporting each other, and working together to make Cambodia great again.