Edited by: Heng Kimkong, a Visiting Senior Research Fellow at Cambodia Development Center and a PhD Candidate in Educationat The University of Queensland, Australia 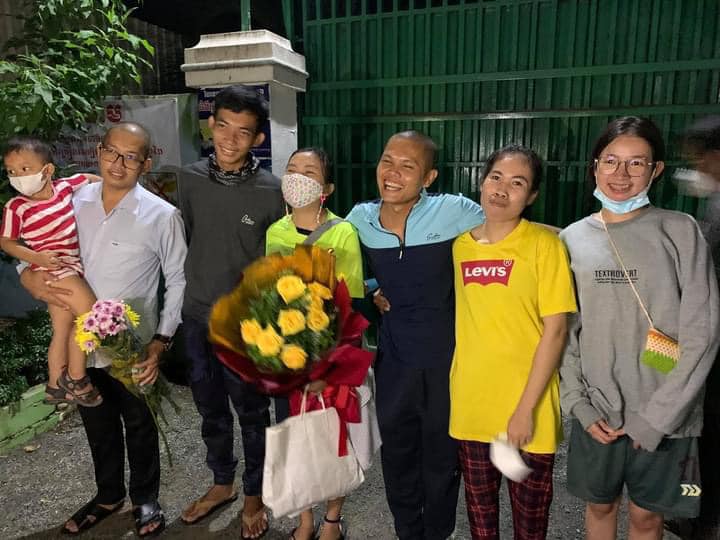 The former Secretary-General of the United Nations, Kofi Anan, once said  “A society that cuts itself off from its youth severs its lifetime; it is condemned to bleed to death”. Youth’s participation in socioeconomic and political developments play crucial roles for Cambodia as a developing country. Youth accounts for more than 30% of the Cambodian population of more than 16 million people. Youth and their civic and political engagement are in danger when their freedom of expression is suppressed. In recent years, some outspoken youth activists have been arrested and jailed for expressing their concerns on critical issues impacting their community and society. Why should they be in jail for expressing concerns on important social issues? Why, as youth, do they have to end up in prison rather than receive praise for their activism? What are the negative impacts of the suppression on youth that prevents them from expressing their opinions?

Three members of the Mother Nature Cambodia were accused of “plotting” to oust the Cambodian government and were arrested in 2021. The previous arrest of this youth group has, no doubt, affected young people’s ability and freedom to think and express themselves. Although their sentence has been reduced and now that they are out of jail, the arrests have already scared other young people and youth activists who want to express their concerns. The damage has already been done. The arrests and jailing of young people have undoubtedly affected Cambodian youth’s freedom of thinking big. This damage will continue to affect their thinking for a long time. More importantly, the act of arrests or imprisonment to silence the citizens only opens a bigger gap between the “governed” and the “governors” and it could cause more misunderstanding and conflicts. There is one saying that goes: “Real gold does not fear the test of fire”. If you do not commit the act, you shall prove your innocence. You should not be scared. The government should first hold discussions with the concerned parties to listen to the problems before having any accusations. The “Culture of Dialogue'' should be practiced more often, especially in the future. I believe this practice will contribute to a closer and better relationship between the government and citizens.

Government is more than just governing the country peacefully and it is more than just a group of politicians deciding alone how the country should be governed. It is about everyone’s participation in the process. Politics is supposed to be inclusive, participatory and, more importantly, free for all. When the culture of self-censorship is rooted among the citizens, especially the younger ones, the ability to think creatively and independently will be dwarfed. Cambodia does not only need more creativity and innovation in businesses and startups, but it also needs political innovators, which is crucial for the country to build a more unique and prosperous nation in the future. The world is dramatically changing, meaning the current political system might not work for Cambodia in the future. In this regard, the next generation should be encouraged to think big, free and beyond. Arresting youth activists will only suppress their potential to think beyond things and dwarf their potential in thinking creatively and innovatively. Therefore, youth civic and political participants are extremely crucial for Cambodia and no youth should be arrested for expressing their opinions on issues that matter to them and their country.

Why is youth and civic engagement important for Cambodia?

As a citizen, we have the responsibility to lead our country along with the government officials and politicians. We have the role to direct the country with them. Cambodia is not owned by anyone. The next generation will inherit everything from their current leaders. Therefore, the government should not pressure themselves to overwork and work alone. Some issues could be helped by the citizens who have the right to help and keep the government accountable for what it has promised in its elections campaign. This could help the government save some time to focus on bigger issues. Significant problems like deforestation, overuse of plastics, filling of lakes and rivers, and sand dredging, among other issues, should be shared responsibilities between Cambodian people and the government. Youth activists, for a concrete example, could help the government by observing the issues and reporting to the government and media to help spread words so that solutions to the problems can be proposed. The government should not overreact but instead try to understand the issues and figure things out. However, so far, there have been little discussions or frank talks between these two sides. The culture of not talking ends up a confusion between them. I believe young people have no intention to put their country in danger. All they want is inclusive development, less corruption, responsible leaders and transparent governance. The government should act as “parents” instead of “enemies” for youth and other citizens.

Among the 20 political parties in Cambodia, there is only one youth party named “Cambodian Youth Party” which is founded by Pich Sros who is the president of the party and a member of the Supreme Council for Consultation and Recommendations. Cambodia's current political arena is occupied by senior people who have been politically driving Cambodia to what it is nowadays. This does not mean they are not capable of leading the country anymore but when they are retired, who will be the next political leaders in the country? And while they do not seem to equip the next generations to become future leaders, how can young people have the ability to lead their country? The commune and national elections are coming soon and if the space of political engagement is still limited, the chance to have more young politicians are far behind and youth will not feel like they belong to the political sphere anymore. Cambodian youth still suffer from the lack of the capacity and mechanisms supporting them to engage in politics and governance.

This limitation is a result of a prohibition preventing teachers and students not to talk about politics in schools. Youth have become less active in the political sphere over the past few years. Since the ban was announced, they have practiced self-censorship and have been afraid of talking about politics in schools, which affects their critical thinking skill and political literacy. Youth build these skills by discussing and analyzing political issues with their peers but when this practice is banned, how could they improve their skills? The ban to prevent free discussion about politics will also dwarf youth’s political literacy and this will definitely decrease their participation in politics.

All in all, youth and their engagement in political and civic space are essential to build a stronger, more transparent and innovative Cambodia. Youth’s participation in every sector decides the fate of the country. Therefore, their freedom of expression should be empowered and encouraged, rather than suppressed. Arresting active youth or putting them in jail only results in adverse consequences for the country in the long run.

As a youth and a citizen who wants to participate in civic and political affairs in the country, I have a few suggestions to address this important issue: