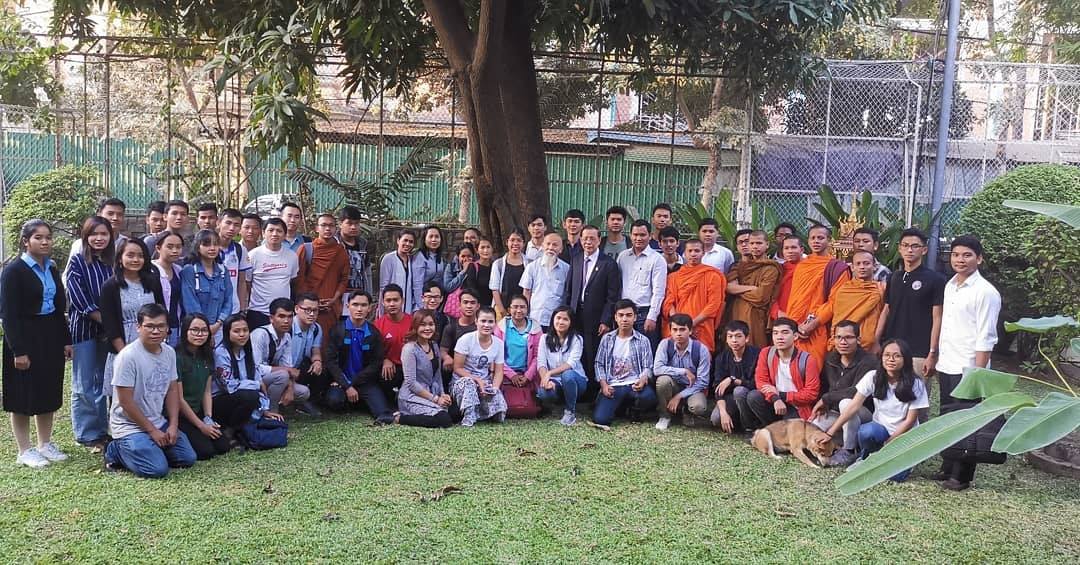 (Photo was taken after Politikoffee Forum on Saturday, 23rd November, 2019 at KAS Cambodia office on the topic: Cambodia's Political Situation: Division or Unification?")

After the Paris Peace Agreements in 1991 which paved the way for the United Nations-sponsored general elections in 1993, Cambodia saw the light of democracy and reemerged from a shadow of darkness, cruelty, murder and civil war. However, the war was only effectively ended in 1998, following a win-win strategy pioneered by Prime Minister Hun Sen. Although Cambodian people endeavored to rebuild their lives in the aftermath of the Khmer Rouge regime, the legacy of the atrocities continues to haunt them. Following the collapse of the Khmer Rouge, Cambodia had to start from scratch because the country had been destroyed economically, socially and politically. The prolonged civil war and the cruelty of the Khmer Rouge have long-lasting impact on Cambodians. Meanwhile, the restoration of the country was confronted by numerous barriers, essentially in terms of the lack of human and financial resources. As Cambodia has been through the dark period and there are still instances of repression and control over the population in the present time, the Cambodian people nowadays seem to lose interest in politics. Many fear retaliation if they speak up about social issues or get involved in politics. Others may simply lack political literacy.

What is political literacy?

The term "political literacy" has been defined differently by different researchers; however, a common definition encompasses the need to make citizens in a democratic country knowledgeable and informed about politics. Moreover, it comprises the comprehension of how government works and critical thinking skills to evaluate various point of views in society. In brief, it is about having skills, knowledge, and competency considered necessary for a citizen to take part directly or indirectly in addressing political issues facing the country.

Besides, it is about having the ability to read about the issues and events from a political perspective. People can use their idea, language and argument to deal with the public issues. As Cassel and Lo (1997) asserted, “the goal of political literacy in schools is to create competent and informed citizens that are prepared to participate in a democratic society.” They defined political literacy as being "knowledgeable of basic political concepts and facts".

To be politically literate, we should know how the government works, the activities the government engages in to conduct the affairs of the country, how parliament is formed, how elections are conducted, and how leaders create policies to address the nation's needs. Knowledge of these important issues is vital for meaningful political participation in a democratic system.

Why is political literacy important?

One reason we should care about political literacy is that at least we should always be aware of what is happening around us. For instance, if the law is being made or passed already, you must know how it is? Does it have a negative impact on us? If it may produce the negative impact, what can we do to make our voice heard?

People's political choices can have a big impact on a lot of people's lives. Many people think of politics as being about the government and law making, which is true, but it is far more complex than that. People are often negatively impacted by political decisions. Any vote we cast will either make or break other people.

To choose the right leader who can best serve us as citizens, we need to have political literacy which will guide us to know the type of politicians we vote for and how can we make them accountable. At least, we let them know who we are and that we understand our roles and responsibilities as a good citizen in a democratic state.

Why does political literacy matter for Cambodians?

As Cambodia adopts multi-party democracy, active participation from its citizens is significant to the democratization process. According to the Cambodian constitution, "Khmer citizens of either sex shall have the right to participate actively in the political, economic, social and cultural life of the nation."

However, Cambodian people’s political participation is constrained by major obstacles related to political perceptions, political environment, social hierarchy and culture, and economic factors. Moreover, limited education regarding political literacy also contributes to this problem. Many Cambodian people, especially youth, still do not have substantial knowledge about some of the most important elements of a democratic society, such as accountability, transparency and civic engagement. Therefore, their meaningful participation in politics remains limited.

Democracy is a political system in which people have the right and power to choose a leader by themselves. According to Merriam-Webster Dictionary, democracy refers to "a government in which the supreme power is vested in the people and exercised by them directly or indirectly through a system of representation usually involving periodically held free elections." Abraham Lincoln once said that democracy is “a government of the people, by the people, and for the people."

Considering these definitions, what will happen when citizens do not really follow up with political events or public affairs in their country? One scenario is that bad politicians may be elected to lead the country. These kinds of politicians will just do whatever they want to serve their self-interest and family interest, not the common or public interest.

The question is that what has happened to politics in Cambodia? Based on the report, it seems the country is edging toward a totalitarian or authoritarian regime in which government can use its iron-fist approach to crack down on any activities which are against the interest of the ruling elite. To understand this issue, we need political literacy, and as Cambodians we should be aware of our country’s politics as well as where our country is heading. A lack of political literacy will be dangerous as we do not play a role in shaping the direction of our country.

In conclusion, when we have political literacy, we can contribute to making our nation become a truly democratic state. Also, we will understand our country’s politics so politicians may be more careful of their own actions and promises. As a result, politicians will not just be easily elected to control the country. The fate of our country depends on us who are individual cells of the society. We cannot just wait for someone to do it for us. We need to do it by ourselves. Thus, I would encourage everyone to actively participate in politics regardless of whether it is formal or informal participation because our involvement will likely make politicians care more about us. More importantly, as citizens we must study, monitor and participate in social activities to help our society grow. Our country does not belong exclusively to one person, but to all of us. Do not neglect our country's affairs. Live with politics. Politics is life. No politics, no life.