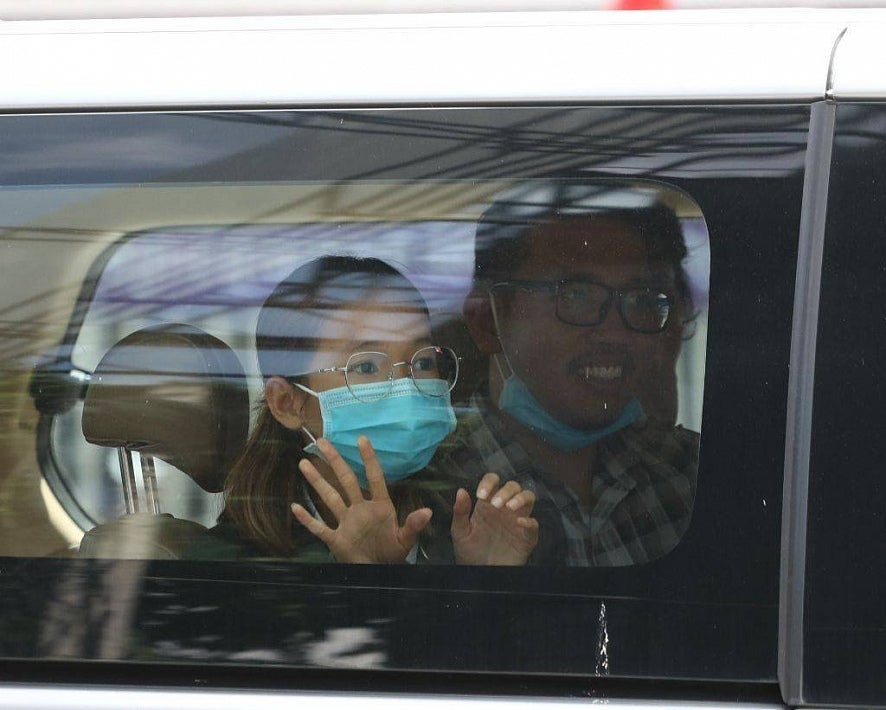 In Cambodia, youth civic engagement seems to have increased significantly over the past years. They have become more interested in partaking in social works as well as expressing their opinion on social media platforms on different topics while trying to get involved in any activities that aim to raise the wellbeing and quality of life of people in their respective communities.

However, youth engagement in environmental protection appears to be facing more challenges with shrinking civic space and increasing restrictions. Some of them have also risked being arrested and imprisoned.

As can be seen, three environmental activists who are members of the environmental NGO Mother Nature Cambodia—Sun Ratha, Ly Chandaravuth, and Yim Leanghy—were arrested two days before the Queen Mother’s Birthday. All of them were formally charged with plotting against the government and insulting the King under articles 453 and 437 of the Criminal Code, ostensibly after they had documented water pollution in Tonle Sap River.

Moreover, this is not the first case that involves the arrest and imprisonment of environmental youth activists. Five other members of Mother Nature Cambodia were also sentenced to jail for incitement to cause serious social chaos as they planned protests against the filling of Boeung Tamok Lake in Phnom Penh.

Personally speaking, it has now become more common in Cambodia that environmental youth activists are accused of being anti-development or allegedly trying to topple the government. But what I want to emphasize is that it is outrageous when young and environmentally-concerned citizens have to face unfavorable conditions, having to confront apprehensions and incarceration for taking part in safeguarding the environment and natural resources.

Any negative actions taken against them by the authorities only discourage other people, especially youngsters from expressing their opinions freely and meaningfully, and this action would prevent them from thriving to become more active and environmentally responsible citizens in the future.

Regarding the prosecution of environmental youth activists in Cambodia, Amnesty International’s Deputy Regional Director for Campaigns, Ming Yu Hah already warned that legal actions are not only the attempt to intimidate members of Mother Nature Cambodia but also “the entire generation of Cambodian youth who have dared to stand up for human rights and environmental justice.”

Thus, if the onslaught against young people continues, I would say, it will impact the future of Cambodian youth. And the next generations will not have enough courage to demonstrate their passion and commitment to protecting the environment and natural resources

Moreover, the enduring fear of being arrested and jailed would only continue to trigger the so-called self-censorship. They soon will lose interest in actively participating in tackling issues facing our society. Environmentally speaking, we only will end up failing to address the environmental problems such as growing deforestation and pollution if the involvement of young people is lacking. Of course, the majority, if not all of us, will be the ones who eventually will be badly affected by this failure.

Based on my observation, it turns out to be less and less common for young people to show concern and express ideas on sensitive yet essential issues such as the environment, politics, and human rights. Frankly, they turn out to focus more on other things, including social trending and any topics that are less beneficial to society.

Even though this can be a bit disappointing and depressing, I remain hopeful that we can change this and work together to promote environmental activism in our country.

Currently, we need more voices from youth in resolving social issues and their active participation in civic engagement. And it is essential to keep promoting and supporting environmental youth engagement if we want to see their more proactive role in addressing the environmental issues. Here I would offer three humble reasons why youth environmental engagement is crucial.

First, it can serve as a role model that allows young people to influence or inspire others. By granting them space and supporting their active participation will aspire them to be mindful of the environment, voice their concerns with reasons, and take appropriate actions to deal with all challenges. A prominent example is Swedish climate activist Greta Thunberg, who has become a role model for youth globally for her effort, confidence, and bravery in leading the global climate strike movement and demanding climate actions. If the country can free up more spaces for young people to discuss, debate, offer solutions as well as defend the environment, it will both improve its natural resource management and create a more inclusive and open society.

Second, it enables a diversity of opinions expressed by young people on environmental issues. Through debating and discussing, I think, people will not only be able to expand their knowledge but also change their mindsets as well as their behavior toward the environment. These changes are very instrumental for our country to build a better and more resilient future for our younger generations.

Third, granting our youngsters opportunity and space to interact in environmental protection also improves the public image of our country. While young people in other countries earn appreciation and support for their efforts and actions, Cambodian youth, who care about the environment and are courageous enough to speak up against anything that impacts the environment negatively, face arrests and prosecution. Therefore, if this continues, it will only further damage the good image of our country.

As a developing country, Cambodia has a population of around 15.8 million —two-third of whom are under the age of 30, meaning that we need to listen to their considerations carefully. Furthermore, we also need their active participation in safeguarding nature and preventing all kinds of environmental destruction as the government alone can’t solve all problems facing our environment.

All in all, the attempt to block the environmental youth campaign in any form must end, and the government should also drop all charges against those arrested environmental activists. Doing so allows the government to demonstrate that it recognizes the importance of youth in any stage of the development process and indicates its genuine efforts and intention in working in partnership with the youth in tackling environmental problems and creating a sustainable future for younger generations.